Note: This is an attempt to merge ancient writings, religious traditions, and modern science into a new creation myth — one that unifies the human experience.  It is being shared as a work in progress. Comments and suggestions welcome.

Life began on Earth almost 4 billion years ago.  Primates have been around for about 85 million years, while modern humans first appeared just 200,000 years ago.  Our oldest ruins are roughly 12,000 years old, while our oldest writings go back just 5,000 years.

In other words, we’ve only just arrived here on planet Earth, and most of our history is missing.  We really don’t know much about the first 195,000 years. Here’s what we do know.  Early humans were few and far between for much of our existence:

We also had to contend with severe climate change, including several ice ages.  Remember, our last ice age ended just 14,000 years ago, and it’s been unusually warm ever since:

These climatic changes caused us to migrate in communal waves, leading to different people living in different parts of the world: 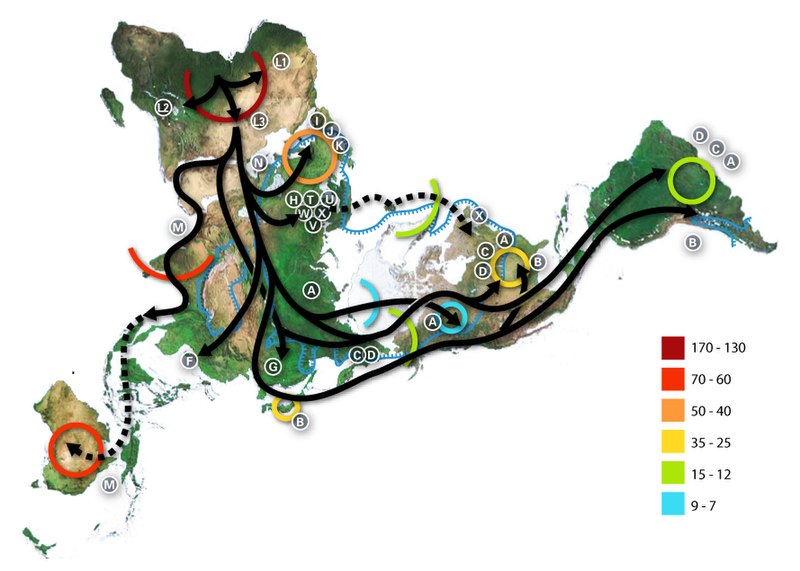 Human history begins around 5,000 years ago, when our oldest writings first appear in ancient Sumeria  Writing quickly spreads to other parts of the world, as civilizations start springing up in places like Egypt, India, China and beyond.

The actual year history begins for each of these civilization depends on when writing is first adopted there.  Those that were first documented in 2,500 BC, have a lot more history than those that were documented in 500 AD. Three thousand years more, to be exact.

They are also a lot closer to our prehistory (stories from before the time of writing).  Stories that have been preserved and passed down to us through oral traditions.  By comparing these so called creation myths, and how they change over time, we can get a more complete picture of our prehistory.  Here’s what we know:

From our oldest traditions, humans living in small groups were visited by beings who came from the heavens, and taught us things we didn’t know.  Some of these aliens were here on assignment, representing higher interests.  Others where here for pleasure or other reward.  Some were stranded, or even banished here.  Some lived apart from humans, while others intermingled.

Some of these visitors were even hailed as gods, as they helped us establish some of our earliest civilizations. Examples include the first pharaohs of Egypt, and the first emperor of China.

Traditionally, history begins when writing is invented.  For most of this time, however, only a small number of people could read or write. Literacy really started to improve with the introduction of the printing press in 1439 AD. It wasn’t until the 1900s that a majority of humans were literate.

Something happens around the time of Moses.  What had once been a world where alien beings were openly acknowledge and worshiped, became one where aliens were now considered mythical beings. Angels and other spirit beings would take their place.

The Rise of Monotheism

By the time of Moses, there were over 2,000 alien gods and offspring worshiped in Egypt alone.  But all of this would soon change with the rise of Monotheism.