With so much extra time on our hands, I’m inviting you to a written conversation about world-changing ideas and concepts, as well as other topics I’m passionate about.  Please email me directly with any private thoughts, or publicly on my facebook or twitter feeds.

These days, across the major platforms, you never really know how widely a posting is being distributed.  Or whether it’s being suppressed, or distributed at all.  Our reality increasingly exists in the ether, which is under increasing manipulation and control.

To bypass the censors, I also suggest subscribing to my personal blog, RSS Feed, or moderated mailing list.

As always, comments welcome.  Until next time …

We hear many people calling Bernie Sanders a Socialist. A Communist. A Fascist.

Whatever you call him, he is a progressive. He’s trying to address the structural imbalances that have built up in the current system. And that scares the hell out of those who are benefiting the most.

This is why they are trying so hard to frame this as “something to be feared” vs. Capitalism. The truth is, capitalism as we currently know it, is the problem. Its never ending quest for growth and maximum profits, without regard to the resulting pollution, depletion of natural resources, war, and human misery.

While capitalism may have served us for a spell, its days are best behind us.  Don’t let the talking heads convince you otherwise. We need a different path.

P.S. This is not an endorsement for Bernie.

Everything that has ever happened in your life, has brought you to read these words at this moment in time.  What you do in the next is under your control, and can impact the arch of your future.  In every instant, of every minute, of every day, you can make a decision that changes the direction of your life, and impacts everyone and every thing around you.

It is “in this instant” that free will can be expressed, and the future can be changed.

Unfortunately, most decisions are made on autopilot, and propelled by habit and tradition.  To change the direction of our future, therefore, we must better understand this autopilot, so that we can set the controls toward a new, better destination.

For those interested in world-changing ideas and concepts, I’ve recently launched Fenello Talk, an old-style email discussion list.  Beginning today, I’ll be adding curated content from that list into a new category of my blog called “Talk on Fenello Talk.”

Here is the first entry, beginning with my response to Richard Moore’s post: “The story of my quest for understanding:”

My theories of ‘the problem’ and ‘the solution’ have evolved by this process over the years … Eventually I reached the position that still dominates my thinking: the problem is hierarchy itself … We’ve lived under hierarchy ever since civilization began

By common definition, civilizations share 1) a hierarchical social structure, 2) a common belief system, and 3) a written language.  That means that every civilization from the beginning of “time” has had some type of centralized authority, supported by beliefs as echoed in their written language.

Note that all three are related.  If someone is able to capture the written language (through censorship or propaganda, for example), they can impact the common belief system, and impact the social order.

You are who you are, because of what you believe about the past. 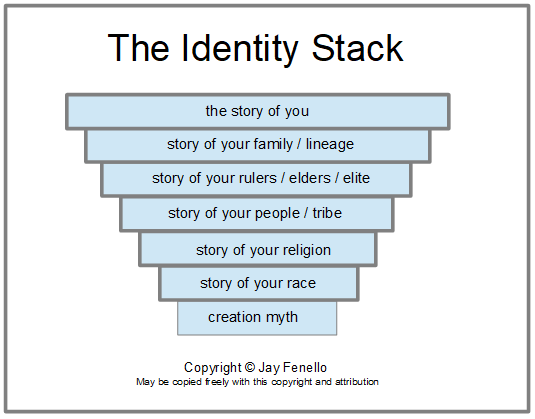 Layer upon layer, story upon story, your identity is built along a unique path from the past to present.  While the order may vary, the lower levels are typically set when you are young, and become more entrenched and difficult to change as you age.

On top of it all lies ideology, or how you project yourself into the future. Whether you are a Democrat, Republican, or a Nazi, you embrace your beliefs because they are consistent with and build upon the foundational stories of your life.

Historically, when large groups of people change foundational beliefs, big things happen — governments fall and new religions are born.  This is how our republic was formed, and how the former Soviet Union ceased to be.

And it feels like big things are happening now.

As a computer engineer by training, I learned how to design and build computers from the ground up, in layers.  Transistors, integrated circuits, firmware, operating system, drivers, applications, networks … computers that can listen to the words you speak and answer simple questions.

Later in life, I noticed similarities with human consciousness, and the way it is also built in layers: 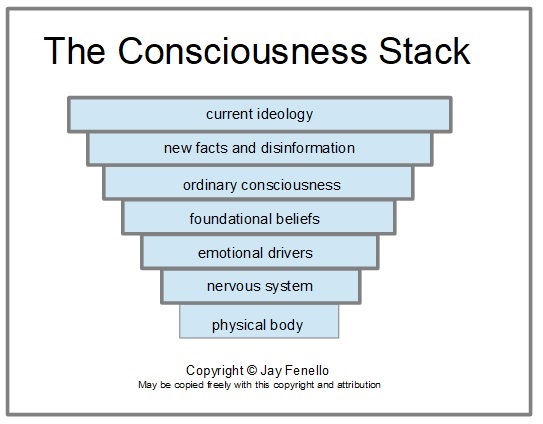 To get people to agree on abortion, or climate change, is impossible at the “ideology” level — especially when current beliefs are built upon conflicting, lower levels.  To resolve these conflicts, we need to find agreement on the more foundational levels.

That explains my focus on creation myths and origin stories. By exploring how these have changed over the centuries, people can better see behind the curtain.  How these changes seem to happen once or twice every thousand years.  How it looks like we’re about to have one now.

We can’t fix the many problems facing our world today, without fixing politics. And we can’t fix politics, without reconciling our foundational beliefs. Whether you are Democrat or Republican, black or white, Christian or Jew, Moslem or Hindu, you are who you are because of what you believe about your life story.

This is the story of where you came from, why you are here, and where you are going. This is the creation myth you grew up with, embellished with your family history, and the life choices you’ve made along the way. It explains how you fit into the social order around you, and your role in today’s reality.

Beneath it all lies the creation myth, the foundation of all belief systems.  From ancient Egypt to Rome, to modern day Beijing and Washington, D.C., every civilization that has ever existed has been built upon a creation myth.  It’s what gives power to people like Khamenei in Iran, and Salman in Saudi Arabia. (and Trump in the United States)

To bring peace to the people of the world, we must get beneath the superficial issues that divide us, and connect on a deeper, more foundational level. By comparing our creation myths, and how they’ve changed over the years, we can see behind the curtain and take back control of our destiny.

To really change the world, we need to reconcile our creation myths.

Creation myths are the stories that tell us who we are, why we are here, and how we fit into the social order.

Creation myths are the stories that make up our foundational beliefs — beliefs that underlie our behavior at levels we are often unaware of.

Creation myths weave together a story of early humanity from the time before writing existed, to the time when written language first emerges. Depending on the year first documented, creation myths can share similar stories, yet vary widely in interpretation.

We can see this by comparing the Old Testament, the New Testament, and the Koran. While they all build upon the story of Adam and Eve, they each end with the birth of a new foundational belief system, supportive of a new social order.

To bring peace to the Palestinian, Jew, Christian, and Muslim, we really need to explore these foundational beliefs.

To really change the world, we need to reconcile our creation myths.

Once you accept that a deep state exists — a permanent, un-elected power structure secretly running things from behind the scenes — the child molestation crisis becomes more understandable.

To secretly run things from behind the scenes requires an ability to control people at  multiple organizations and institutions.  One of the easiest ways to control people, is to have something over them that can destroy their lives and reputation, and send them off to prison for a very long time.  Child molestation is one of those things.

This explains why the feds refused to prosecute Jeffrey Epstein the first time around — because he has ties to intelligence agencies, and works for the deep state.  It’s also why Britain refused to prosecute Sir Peter Hayman and friends, and why the Catholic church and other institutions have refused to turn in members guilty of similar atrocities. Each of these organizations has been infiltrated with deep state operatives who are protecting those supportive of their agenda.

Acosta … cut the non-prosecution deal with one of Epstein’s attorneys because he had “been told” to back off, that Epstein was above his pay grade. “I was told Epstein ‘belonged to intelligence’ and to leave it alone,”
— @jfenello

This also explains why we keep ending up with leaders of such questionable moral character.  They are the ones ultimately supported by the powers that be — exactly because they are controllable (blackmail-able).

The current case against Epstein implicates some very powerful people, including presidents Trump and Clinton.  It will be interesting to see how deep this rabbit hole goes.  However this turns out, it is refreshing to see an attempt to return to lawfulness expressed in the Southern District of New York.  Let’s hope this catches on.

Comments welcome.  Until next time …

The battle in Washington is heating up, as Trump gives Attorney General Barr the authority to declassify documents related to the Russia investigation. It is alleged that a small group of people acted outside of normal channels to spy on, target, and attack the presidency. In the process, people like former CIA Director Brennan, former National Intelligence Director Clapper, and former FBI Director Coumey could all be implicated.

If coordinated, it could even be considered treason … a crime punishable by death!

The result today is open warfare between the presidency and the deep state.  While none of this surprises me, I am surprised that the deep state is being openly discussed at all.

To admit that a deep state exists, is to admit that we have a permanent, un-elected power structure secretly running things from behind the scenes — despite the best wishes of the people, or the people elected to represent them.

In order for a deep state to exist, it must 1) operate in secret, and 2) be coordinated across a diverse group of power centers.   Power centers that include political, business, media, religious, academic, and military leaders.

“I have long held that America’s Deep State — the permanent, un-elected government and its many proxies and public-private partnerships — is driven by warring elites.  There is no purpose in making the conflict public, so the battles are waged in private, behind closed doors.”
— Charles Hugh Smith

Who’s Behind the Deep State?

There is a deep state, and it’s part of a of a much larger power structure that secretly controls things from behind the scenes.  This power is coordinated at meetings like the recently concluded Bilderberg Meeting in Switzerland.  That’s where business, academic, religious, military, and political leaders get together to discuss options, build alliances, and decide upon strategies to be implemented.

Events like this happen all over the world, across the various power centers.  The people who attend these events are representing the interests of those who really control the assets of planet earth.  This includes many legacy assets, like the ability to control information, create money, and lead the masses.

Which leads to the biggest conspiracy of all.  Not only are these power centers secretly colluding to control events on planet earth, their ranks include alien beings who retain influence due to their legacy contributions to our early civilizations, monarchies and religions.

I know all of this controversial, so I’ll probably hear crickets, but comments welcome and encouraged.  Until next time …

Note: If you have any interest in exploring how we got here, please see my work in progress called:  A New Creation Myth