I love the movie “Mr. Smith Goes to Washington,” and here’s my favorite scene: 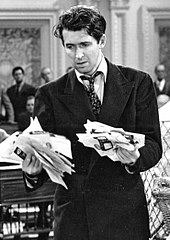 25 hours earlier, he had just taken over the senate floor in a filibuster to prove his innocence, and reveal the extensive corruption that existed in the senate. He did it to a room full of rotating senators and reporters.

Never in America would I believe I’d see a day like that day.

But today is that day, and Bobulinski is that Mr. Smith.

He’s one of Hunter Biden’s former business partners referenced in email found in Hunter Biden’s laptop. You may have heard that this laptop is somehow Russian.  It is not.  It was this allegation that forced Bobulinski to step forward to clear his name.

Since that time, Bobulinski has held a well attended (and barely reported) press conference, confirmed his evidence on Tucker Carlson, produced multiple electronic communication devices that corroborate his disclosures, and provided copies to the FBI.

Since that time, the FBI has revealed that there is an open investigation into contents on the laptop, and a senate committee has verified Bobulinski’s evidence.

Despite all of this, this story has been blacked out of almost all media outlets.

If you don’t the know about this news story, you need a new news source.